One of the most fascinating and useful books for recreating and understanding the landscape of Medieval Sherwood Forest, and also its administration and how it functioned is the Sherwood Forest Book.

An editted version was published in 1965 by Helen E Boulton in the Thoroton Society Record Series Vol XXIII (see bibliography).

It was actually compiled from a number of surviving books of the forest including the some from London and some from Nottinghamshire. The eldest the ‘Exchequer Treasury Receipt Forest Book’ dates from the late fourteenth century. Another the ‘Middleton Forest Book’ is in a late sixteenth century hand but is a copy of a far earlier text. 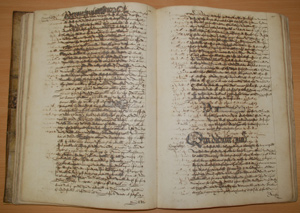 The Forest Books of Sherwood include copies of statutes and ordinances, perambulations of forest bounds, inquisitions, examples of writs, chapters of regard, and extracts from the forest eyres (Boulton 1956).

These have been used to understand the boundaries of the forest, and also of the woods within the forest.

One entry possibly written for the forest eyre of 1334 lists the boundaries of the Kings wood in Sherwood Forest. Amongst them are the Hay of Birklands, Bilhaugh and Clipstone Park.

These list landmarks around the boundary of the woods. These are topographic features within the medieval landscape. Some of which can be traced onto the modern landscape, enabling the outlines of these woods to be traced or inferred by the landscape archaeologist.

As well as the king’s woods, woods in the different parishes in the forest are also often listed, often in relation to issues arising from the affairs of the court of the forest.

They not only give us an insight into the landscape, but also into some of the people who came into contact with these courts.

Overtime I will explore how these documentary sources and evidence from historic mapping can not only give us an insight into, and help us to recreate and visualise the medieval landscape, but also the how we can meet and learn about the people who lived out their lives there, even hear their voices from some of these texts.

(More on the use of historic documents in landscape archaeology and how they have been used in rediscovering the landscape of Medieval Sherwood Forest and the people who lived there soon)
Posted by Andy Gaunt at 19:31