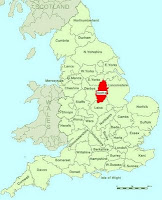 Where was Sherwood Forest?

Sherwood Forest was situated entirelty within the county of Nottinghamshire, in the English Midlands.

Almost exactly in the centre of England.

There were many reasons why it was considered an ideal location for a Royal Forest when it was established sometime in the ealry Norman period.

Some of these are outlined below.


The area north and west of the Trent was an ideal location for a forest, especially the area of the Sherwood Sandstone geology (yellow on map).

These Permo-Triassic rocks (previously known as the Bunter Pebble-beds - but renamed due to the association with the forest) are porous and therefore the overlying soils are dryer and less fertile than the surrounding soils of the limestones and mudstones.

This lack of fertility resulted in less arable cultivation of this sandstone region. Domesday book of 1086 show this area to be far lower in arable landuse than the corresponding areas of the Mercia Mudstones (pink on map) and the highly fertile area of the Trent valley.

Domesday book shows the whole of the area  north and west of the river Trent to be dominated by Wood-pasture. A form of pasturing sheep flocks etc. as opposed to intensive growing of crops.

This landscape of trees, pasture and open heathland can be traced back beyond Domesday and the Norman conquest.
Placename evidence presumed to date from the Dark Ages suggests this area was characteristically well wooded.

The placename ending 'ley' is thought to indicate a clearing in woodland.

The placename field as in 'ashfield' suggests an area of open heathland.

It is noticeable that all of these are north and west of the river Trent.

As well as the natural state of the land, another crucial reason for choosing Sherwood was that the crown had a significant influence in the area.

The Royal manors of Arnold, Bothamsall, Dunham, and Mansfield (the largest manor in the county in the medieva period) were all north and west of the river Trent.


All these elements combined to make this area an ideal location for a royal hunting forest.