If you have an area of land designated for the protection of Deer for the Kings pleasure to hunt and to eat, then the last thing you want is to share it with other hungry predators.

Perhaps the most feared predator in the forest was the wolf. 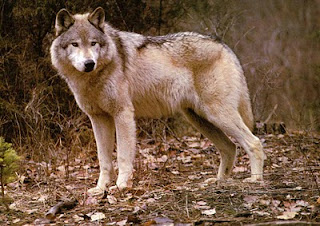 There were wolves living wild and hunting in Medieval Sherwood Forest, and we know this because the records tell us of ‘wolf hunters’ employed to chase them.

The inquististiones post mortem (inquests after death) for Nottinghamshire for the year 1339 list amongst their number a Walter le Wolfhunte:

‘Walter le Wulfhunte held in his demesne as of fee on the day that he died a messuage* and a bovate* of land with appurtenances in Mammesfeldwodehouse in the county of Nottingham of the king in chief, by service of chasing wolves outside of the King’s forest of Shirewood, if any they found.’
(Blagg 1939)

This is a wonderful insight into the lesser known positions within forest administration - a man in the king’s manor of Mansfield Woodhouse being directly employed by the king to chase wolves.

It also tells us something of the landscape of the forest- one still wild enough to harbour wolves.

But most wonderful is the insight it gives us into the people of the forest. What kind of man was Walter the Woolfhunter? A grizzled ‘Davy Crockett’ style man of the woods, hardened and fearless running off into the night, whilst others run the other way? 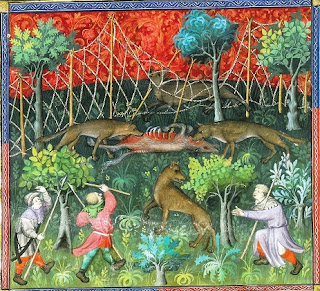 Grizzled and fearless as he may have been… wolves were probably not a daily occurrence. On his days off from wolf hunting Walter was also liable to be called to the kings service as a forest official:

The same 'Walter de Wulfuntte de Mammesfeldewodehouse' appears in an earlier record. Here he is serving as a regarder (a forest official dealing in the boundaries of land) at the 1287 forest Eyre to testify in cases of assarts (clearing of woodland for arable) against people living in the forest of Sherwood.

The medieval text is in Latin, Walter appears alongside a group of selected men to testify as to what they know, and they include:

The post of Wolfhunter lived far beyond Walter its most famous occupant:

A 'Sir Robert Plumpton held one bovate of land in Mansfield Woodhouse, called "Wolf-hunt land," by service of winding a horn, and chasing or frightening the wolves in the forest of Sherwood' in 1432 in the reign of Henry VI. (Robert White, Worksop, The Dukery, and Sherwood Forest, (1875)).

These wolfhunters must have been formidable characters, fearless and strong who carried out their roles within he forest administration- mostly annonymous to us due to their usual absence from the records.

These few chance survivals in the documentary record offer us a rare and wonderful opportunity to see into the lives and livings of some of the characters of Medieval Sherwood Forest.

*messuage: house or dwelling.
*bovate: amount of land tillable by one ox in a ploughing season
*palmer: interestinlgy the surname palmer is believed to be from pilgrimage. A person would bring a palm back home as proof of having visited the holy land.

the Saxons of Sherwood Forest

This charter lists a 'Scirwuda' (Shire Wood) as a boundary mark of the land granted to the Archbishop.

This reference is often used to suggest that there was a common wood of the shire in the 10th century in Nottinghamshire that belonged to the people and was shared by them.

The story then goes that the evil Normans came along and took the shared forest away, for the exclusive use of the king.

As nice as this idea is, there is no clear reference to a forest, or any such shared wood of the shire in Nottinghamshire before the conquest of 1066.

Plus it is not possible to tie the 10th century Scirwuda in the north of the county, with the Royal Hunting Forest that bore the name Sherwood from the late 12th century onwards.

The northern boundaries of Sherwood Forest lay 10 miles south of the location of the wood called Scirwuda.

So although we cannot directly date Sherwood Forest back to pre-conquest times it is possible to learn something of the people of the Sherwood Forest area at the time of the Norman Conquest and before.

One possibility is that the Forest boundary recorded in the 13th century was a reflection of the original forest boundary (see Castles and Sherwood Forest entry for more details).

It is likely that the forest was created in the years following the Norman conquest, around 1066.

So who were the people who lived in the area that was- or was to become Sherwood Forest, in the years around the Norman conquest?

Sadly we cannot know the names of the simple farmers and workers of the land- but the names of some of the landowners from the time of the conquest are recorded in the Domesday book for Nottinghamshire.

They are the names of the local ruling elite who would suffer by losing their lands in the change of power that came with the Norman Conquest.

Most of the landowners listed lost their posessions to the incoming Normans by the time that Domesday Book was written in 1086.

The following is a list of the towns and villages of the Forest, and the names of the original 'Saxon' landowners where they get a mention:

Nottingham: Earl Tosti (brother of Harold Godwinson who was King of England until the Battle of Hastings) owned land and buildings in the town.

Hugh son of Baldric was its sheriff.

In 1066 King Edward the Confessor held Manors and jurisdiction over land including: Mansfield, Arnold, Sneinton, Warsop, Budby and Edwinstowe,

The other listed landlords are as follows:

Blidworth: the Archbishop of York (Ealdred),

These names sound ancient and archaic (but also poetic and beautiful) to us now.

That is compounded by the fact that the names that replaced them at the Norman Conquest are so much more familliar to us.

Henry, John, Richard, William, Stephen, were all names of the Norman and Angevin kings who ruled between them from 1066 to 1272.

All these names were French.

Edward I, crowned in 1272 was the first English King since 1066 to carry an English name.

In Nottinghamshire these name would be replaced powerful Norman landowners including a Roger or two, an Alan, a William, a Walter, three Ralphs, and a handful of Gilberts, to name a but a few...

Although we can't know the characters or the actions of these English rulers- dispossed by the conquest, their names and the names that replaced them do indicate the dramatic cultural shift that took place with the Norman Conquest- at the level of the local ruling class as well as at the top of society.

This change of authority and culture had a great impact on English Society as a whole.

Locally it would bring with it the Laws of the Forest that would have a huge impact on the landscape and the people of this area.

The area that would become Medieval Sherwood Forest.