Hanging and execution in Sherwood forest 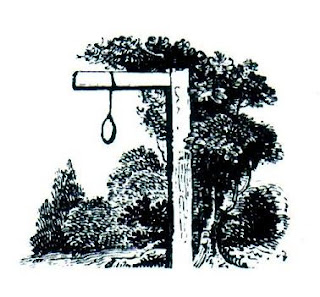 The Forest Law in England is reknowned- even famous as being brutal:

The forest Assizes of 1184 (Henry II) and 1189 (Richard I) prescribe blinding and castration as a punishment for those who take deer or boar in the forest.

It can be assumed that the reputation for brutality is not unfounded; indeed the very fame of harsh forest law enforcment helped to generate and sustain the legends of Robin Hood.

However in 1215 the Barons forced King John to sign Magna Carta.

Some of the clauses of Magna Carta banned hanging and mutilation as punishment for forest offences.

Both of which were a considerable time after Magna Carta.

As a result- no accounts of hangings directly related to Forest Law offences survive for Medieval Sherwood Forest.

There are a number of accounts of imprisonment, and of people being outlawed- for poaching deer (see Poaching in Clipstone Park in 1279 and Forest Law Outlaws entries for more details).

Despite this, hanging did occur in Sherwood Forest throughout the medieval period for other offences:

Namely theft of property- and these were infringments against the common law.

The Borough Records for Nottingham show that in 1315-16 Gervase Aubrey, of Wilford, was captured in the town of Nottingham with a cow stolen from Henry de Gedling...

...not exactly something you could hide up your coat!

He was brought before the jury and found guilty, and therefore 'Ideo suspendatur- (let him be hung)!'

Also, this time on the 2nd June 1316: Walter le Shepherd, of Sallow, was taken at Nottingham with 11 sheep stolen in the field of Nottingham, from a Henry de Wollaton...

Amazing... presumably a larger coat would be needed to conceal 11 sheep!

These hangings presumably took place on the town gallows for Nottingham.

These were situated on a sandstone ridge on the side of the King's Highway to York, north of the town walls and its great open fields.

They Loomed large over the town as a symbol of power and justice.

It was not just in Nottingham that hangings occured in the forest:

They also took place in the King's Manor of Mansfield to the north.

'On Thursday 10th June 1316... Geoffrey son of Roger of Walesby was arrested in Mansfield with a green surcoat worth 4s. He would not say how he came by it, but Maud daughter of Henry le Thacker of Mansfield said that it was hers and that it had been stolen at the house of Richard Alche of Mansfield. Geoffrey denied it and put himself on a jury of twelve local men who found him guilty. He was sentenced to be hanged...

...Another criminal, guilty of a similar offence a few years later, was more fortunate. In 1319-20 Richard son of Richard of Ireland of Mansfield admitted he was guilty of stealing a horse worth 10s. in the fields of Mansfield, but he did not do so until he was safely in the sanctuary of St. Peter's Church. He abjured the realm, thus leaving the country for good in order to save his life' (Crook 1985).

The gallows for the Crown Manor of Mansfield stood on the side of the road from Nottingham to Mansfield, south of the town. (Interestingly in modern day 'Thieves Wood').

Again this was a very potent sign of royal justice and power to anyone entering the manor.

The hill on which they stood is listed as 'galow tre hyl' on a medieval map of Sherwood Forest (see Gallows in the forest? entry)

Abjuring the realm was a common way of avoiding the gallows and many criminals convicted of theft in Nottingham were given the sentence of 'abjuring the town' when their crimes did not quite warrant hanging.

As well as these sentences of hanging for theft a more curious entry in the Chamberlains Accounts for 1485-6 lists the hanging of 3 monks of Lenton Priory on the gallows of Nottingham although nothing of their crime is listed (Records of the Borough of Nottingham Vol III 1485-1547, page xix).

Perhaps the most notorious hanging in Nottingham in the Medieval period is that of the last Prior of Lenton.

As part of the attempt by Henry VIII to seize monastic land, the prior of Lenton was arrested for treason and thrown into prison in 1538.

In March 1538, Prior Nicholas Heath was hanged, drawn and quartered in Nottingham- his mulitalted body was displayed as a warning to other religious houses, at the gate of the priory.

This violent act brought to an end the priory of Lenton and its spiritual domination of the town.

This execution must have had a massive impact in the town. The priory had been at the heart of life in Nottingham, its annual fair was famous around the land, and the great towers of the Priory could be seen for miles across the floodplain of the River Trent.

So momentous was this act that it could be argued it was one of the moments, along with the dissolution of the monasteries at Rufford and Newstead that signalled the end of the Middle Ages in Nottingham and Sherwood Forest.

The gallows can be seen then, to have had an impact over peoples lives throughout the medieval period- and although no records survive for their use  in Forest Adminstration- their use and their presence clearly had a significant role in the administration and life of medieval Sherwood Forest.

More to come on the courts, crimes and punishments in medieval Sherwood Forest soon).