In the heart of Medieval Sherwood Forest stands an ancient tree named the 'Parliament Oak'.

This tree once stood at over 25 feet in diameter (Dukery Records) and is perhaps the oldest surviving tree in Sherwood Forest.

The tree that survives today is sadly a shadow of its former self, having lived out a thousand year life-cycle.

Despite being aged the tree has had a resurgence in recent years and has re-grown pheonix-like to stand proud once again.

The tree stands on the south side of the road from Edwinstowe to Mansfield and can be visited at SK5765.

It was originally a boundary marker tree on the Royal Deer Park of Clipstone. Occupying the entrance to the deer park known as 'Warsope Gate' on the 1609 William Senior map of Clipstone.

The deer park occupied the northeastern third of the lordship of Clipstone, and provided timber, deer and hunting for the King.

The Parliament Oak was situated on the northern boundary of the deer park- with the park fence- or 'Pale' passing either side of the tree.

But where did the name for this magnificent oak tree come from?

Clipstone Park and its associated Royal Hunting Palace was the Royal Heart of Medieval Sherwood Forest- and was visited by all 8 monarchs from Henry II to Richard II.

Clipstone was so important that a number of monarchs are reputed to have held Parliaments there including King John:

'It has been stated, with some probability of truth, that King John, while hunting in the forest, was informed by a messenger of a revolt of the Welsh, and of an insurrection in the north of England; that he hastily summoned a parliament to meet under this tree, and that it owes its name to that incident' (Joseph Rodgers, The Scenery of Sherwood Forest with an Account of some Eminent People there, 1908).

It is more likely that the tree was named after the more famous and important parliament of Edward I in 1290.

The Parliament was a massive undertaking- with accomodation at the palace being stretched beyond capacity- the Chancery and its Clerks had to stay at the nearby village of Warsop (Crook 1976).

The Paliament Oak may well have been named after this event- perhaps it was named so because the Clerks and Chancery had to pass under its mighty boughs on the way to attend the Parliament from their quarters at Warsop...

The parliament of Edward I is linked to a national event of great romance.

Edward I was at Clipstone from the 19th- 23rd of September, and 12th of October- 11th November 1290 to attended his parliament (Dukery Records).

During this time his wife Eleanor of Castile took ill with a recurring fever. She was staying at the nearby Cistercian Abbey of Rufford.

The couple eventually attempted to travel to Lincoln perhaps for religious as well as medicinal reasons.

Eleanor died on the way- at Harby in Nottinghamshire having crossed the River Trent- some miles short of Lincoln.

Her entrails were buried in the high altar at Lincoln Catherderal- and her body was transported to London.

As Eleanor's funeral courtage travelled from Lincoln to London, a heart broken and devasted Edward erected wooden crosses at every one of the 12 stopping points on her journey- these were later rebuilt in stone as a permanent memorial to his wife.

They were known as the Eleanor Crosses.

A statue of Eleanor can be seen at Harby Church in Nottinghamshire- where she died.

A tragic and romantic story- which shows that even Edward Longshanks had a soft side!

It can be seen then that Parliament Oak symbolises the importance of the Royal Hunting Palace, and deer park at Clipstone, and the importance of Sherwood Forest in medieval times- through the Parliaments that were carried out there and the national events that unfolded there.

Like all the veteran Oaks of Medieval Sherwood Forest- this wonderous and mighty tree continues to inspire to this day- and can tell us stories of our past- if we choose to ask...

The Major Oak is an icon of Medieval Sherwood Forest.

Reputedly the hide away of Robin Hood, and said to be up to 1000 years old! 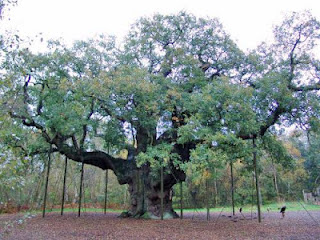 This ancient and magnificent oak tree is at the heart of Birklands and Bilhaugh woods- crown woods situated in the 'High Forest' area of Sherwood in Medieval times.

The tree stands on the eastern boundary of Birklands wood, at the western edge of Gleadthopre open- an area of heath that separates Birklands from Bilhaugh wood.

It may well have been a 'boundary oak' of Birklands wood in Medieval times.

It was named after Major Hayman Rooke a local antiquarian who recorded the ancient oaks of Sherwood Forest in the late 18th century.

Map regression and investigation by the author of this site: Archaeologist Andy Gaunt (Gaunt & Gillott 2011) has turned up an interesting fact worthy of note regarding Major Rooke and the Major Oak.

‘A plan of the hays of Birkland and Bilhagh within the Forest of Sherwood in the County of Nottingham belonging to the crown’. Surveyed in the year 1791 by John Renshaw following an Act of Parliament in the 26th year of George III shows ‘a tree called Major Rooke’ (Nichols 1987).

The map is preserved at the Nottingham Archives as NRO ED 4 L.

It is possible that this is the earliest reference to the Major Oak bearing that name.

Rooke’s publication ’Remarkable Oaks’ was not published until 1790.

It was Rooke’s association with this tree and the fame it gathered following his publications that helped the link to become established.

Previously the tree had been known by a number of names.

It should also be noted that on the slightly later map of Birklands and Bilhaugh surveyed by James Dowland for inclusion in Rookes own 1799 publication ‘A Sketch of the Ancient and Present State of Sherwood Forest in the County of Nottingham’ the tree is unnamed (Rooke 1799). (Gaunt & Gillott 2011).

See the Archaeology of Birklands and Bilhaugh: Sherwood Forest National Nature Reserve for more details and for information on the archaeology of the woods

Before it was known as the Major Oak it was called the 'cockpen tree' because it was reputedly used to house fighting cocks.

It has also gone by the name the 'Queen's Oak'.

The tree now forms the main tourist attraction at the Sherwood Forest National Nature Reserve and is visted by millions of people.

Having stood for nearly a thousand years, it has seen its fair share of history and certainly deserves the title of iconic.

(More to come on the other ancient named an famous oak trees of Medieval Sherwood Forest soon).

Medieval Sherwood Forest was not one giant wood, but had a mixed landscape of villages with their arable fields, pasture and meadows. The forest however was chosen because it had a large amount of woodland and heath.

There were many different woods across the forest- most had names of their own.

A huge area of woodland stretched north-eastwards from Nottingham along the clay ridge now known as Mapperley tops. This wood was divided into many separately named woods belonging to all the different villages nearby (more of that later).

In the northern High forest there were also many woods such as the mighty Mansfield Wood, Kirkby wood, Haywood Oaks, and the woods of Clipstone and Edwinstowe. (these will be discussed in turn at some point).

Alongside all of these was a wood described as the ‘chief wood of Sherwood’ in the Forest Book; Lyndhurst Wood (spelt Lindhurst in modern times).

Lyndhurst means ‘lime-tree wood’ suggesting that species was dominant at one time. In the medieval period it was mainly oak- used for the upkeep of Nottingham castle.
‘During the extensive works that took place at the castle between 1358 and 1368, when Stephen Romylowe was constable, a great deal of timber was taken from Lindhurst. The surviving accounts give details of the employment of carpenters and sawyers there and of the expenses of carting the timber to Nottingham.’ (Crook 1981 in bibliography).

Lyndhurst was originally all the 'wode growing on the eesh parte (east part) of the grete (great) way that leedeth betwxyt Notynhham (Nottingham), and Maunsfeild (Mansfield) unto Sothwell rode (Southwell road) in lengith (length), and the syke (stream) of Rayewath (Rainworth Water) on the southe parte, and the valey where a syke called oulde Idle (foulevil brook- see below) hathe the course of the northe parte in lengith, is called the chieffe wode of the foresh of Shirewood (the chief Wood of Sherwood Forest)'
As stated above the wood was defined by Rainworth Water (a tributary of the River Maun) to the south, and on its northeastern side by a stream called ‘foulevil brook’ (a tributary of Rainworth Water)- the name does not suggest it formed a natural beauty spot at the time.

Lyndhurst was a jealously guarded property of the crown and was separate to the Manor of Mansfield.

It had its own keeper: in the 13th and early 14th century its keeper was Ralph Clere who lived in a lodge called the ‘new repair’ on its south side.

A rectangular moated site survives – sometimes called ‘Friar Tuck’s Island’ (where Robin Hood was reputedly thrown in the river in the 'Curtal Friar) at this location known as Fountain Dale, Lyndhurst. It is on the opposite side of Rainworth Water to the spring known as Friar Tuck's Well.
The site can be visited from the A60 near Harlow Wood and Thieves Wood on the road to Mansfield.

This keeper of Lyndhurst as well as looking after the wood had the job of collecting the tax of Cheminage, a toll on carts passing through the forest, payable to his master the Keeper of Sherwood Forest (see Road Tax entry) Robert D'Everingham.