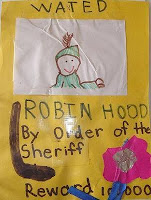 According to a ‘dictionary of Medieval terms and phrases’ –
An Outlaw is:
•A person deemed unworthy of the protection afforded by the law.
•
•He was placed beyond justice and its benefits, much as excommunication placed a person outside the church and beyond salvation.
•
•It was relatively easy to become an outlaw.

As well as being outside the protection of the law, being outlawed meant being seperated from those who knew you. Medieval society was an extremely violent place. It was important to be surrounded by friends who would protect you.

Every man in Norman England had to be part of a frank-pledge. In this system  every man belonged to a group of ten men who were responsible for each others conduct.

It was very important to belong somewhere and be protected by others, to be removed from this could be very dangerous indeed.

However as stated previously it was very easy to  become outlawed, and was often a choice to avoid financial or worse punishments. There were many different kinds of outlaws.

Some of them are discussed below...

The Sherwood Forest Eyre courts have records surviving from 1287 and 1334. These record fines and punishments relating to crimes committed against the forest law.


A number of incidents are recorded showing how people were outlawed as a direct result of forest law.

In 1267 John De lascelles, the steward of Sherwood, caught 2 men with bows and arrows in the forest and took them to Blidworth.

(Probably intending to take them to Nottingham Castle in the morning).
In the night 20 men armed with swords and bows and arrows burst in released the men, and beat up Johns servants who were acting as guards.
They then went to the stewards house, where they broke the windows and shouted insults at him.
In the following inquests many of the men involved could not be found…

Then an excerpt from the Eyre of 1334 states:

It is presented and proved… that Hugh of Wotehale of Woodborough, William Hynde, Wilcock, formerly the servant of the parson of Clifton and Stephen Flemming of Nottingham on the Thursday…
…were in the wood of Arnold, in the place that is called Throwys, with bows and arrows… they shot a Hart so that it died… And its flesh was found putrid and devoured by vermin… and the arrow was found in the said Hart…
…the aforesaid Hugh came before the justices and is sent to prison
…the aforesaid Stephen is dead; therefore nothing of him…
…And the aforesaid William and Wilcock are not found… were exacted in the county and did not appear; therefore they are outlawed...

Sherwood Forest had its own recorded outlaw at large, Roger Godberg.

Outlawed for his involvement in the 2nd Barons’ War (Simon De Montfort against Henry III 1264-1267).

Roger Godberg fled to Sherwood Forest.
Roger de Leyburn, the lieutenant of Reginald de Grey, the king’s Constable at Nottingham castle fought  2 engagements with him and  his followers
-
one in the heart of Sherwood Forest!


In 1270 they were still at large:
‘through outlaws, robbers, thieves and malefactors, mounted, or on foot, wandering by day and by night, in the counties of Nottingham, Leicester and Derby, so many and great homicides were done that no one with a small company could pass through most parts without being taken and killed or spoiled of his goods…’

A price was put on their heads:

Henry III ordered that a sum of a hundred marks be levied from the three counties and paid to Reginald de Grey to hunt them down.
They were captured and Roger was sent to the castle at Bruges.

There are many famous medieval outlaws who operated across the country, some real some imaginary.

These included:
Eustace the Monk, Fulk FitzWarin, and Adam Bell, Clim of the Clough, and William Cloudesly of Inglewood in Cumberland

(these outlaws will be dicussed in turn in the blogs)

The picture to the left is an account of the death and be-heading of Eustace the Monk an early 13th century brother of the cloth and part-time pirate!


Of course it would be wrong not to mention... 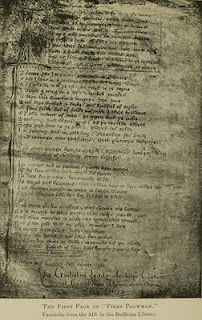 The first literary reference to  Robin Hood comes from Piers Plowman by William Langland from circa 1377:


The world famous outlaw Robin Hood was a hero of Medieval Ballads... his legend will be discussed in the blog page seperately...

However within this same poem another collection of medieval outlaws gets a mention... the Folvilles.

This excerpt suggest that there were some people called the Folvilles who obeyed their own rules and sorted out deceiptful men with their own brand of the law.

Were these men honourable then, as the poem suggests? Fine upstanding sorts who brought justice to the land in the fashion of their literary more famous contemporary?

Perhaps you should read the following before committing to a decision...

John de Folville, lord of Ashby-Folville, Leicestershire
and Teigh in Rutland died in 1310.

John the eldest inherited the manor.

under the leadership of their elder brother Eustace

1326. They were indicted in the murder of Roger Bellers a Baron of the Exchequer who was killed on the road from Melton to Leicester. They were outlawed, and  fled the country…

1327. They had returned and are recorded as committing a series of robberies in Lincolnshire

…and the Sheriff of Nottingham was informed by the government:

‘Robert and Simon de Folville, with a band of malefactors, were roaming abroad in search of victims to beat, wound, and hold to ransom’.

1329. They were pardoned in exchange for fighting for the king .

However while garrisoned with the kings army in Leicester they robbed the burgesses of the town of their belongings.

1330. Their pardon was overturned.

1331. They were hired for £20 by the a Canon of Sepringham and  the Cellarer of the Cistercian house of Haverholm to destroy a rivals watermill 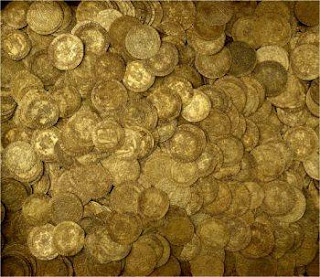 On the 14th January 1332 the Folville gang and a number of associates kidnapped the future Chief Justice of the Kings bench Sir Richard de Willoughby.

On the road from Melton to Grantham

They smuggled him into Lincolnshire and moved from wood to wood to avoid capture.

A ransom of 1200 marks was paid for his release

Robert Lovett the parson of Ashwell since 1316

and not forgetting… Alan Baston the Canon of Sepringham who had hired the Folvilles to smash the watermill.

A collection of thugs, thieves, scoundrels and ... Vicars!!!

A Trailbaston Commission (a sort of posse of judges) was sent to bring the felons to justice.

James Coterel and Roger Savage were pursued to the wild forest of the High Peak, but escaped after a tip-off

The commission failed to bring anyone to justice.

Before too long Eustace was serving the King again, this time in the hundred years war which had recently started.

One again serving the king seems to have earned him a pardon.

In fact Eustace died a natural death in 1347 having never faced justice.

The other brothers were not so lucky:

In 1340 Richard Folville took refuge in the church of Teigh in Rutland where he had been priest for 20 years.

We know all about this because it was recorded in a Papal Bull into the incident.

Because he was a priest taking refuge in a church (despite his rather dubiuos record) the execution was deemed unlawful.

The poor people who had carried out the 'crime' of bringing the Folvilles to justice, were forced to pray for forgivness outside all the neighbouring parish churches...

Whilst being beaten with a rod while a chantrist sang psalms of forgivness...


All these different incidents throughout the medieval period led to the belief around the country that:

‘disturbers of the peace are said to gather together daily to do evil; they ride in force by day and night taking and robbing people at their will, imprisoning some of them until they have made grievous (or sometimes ‘intolerable’) ransoms. They form congregations … and wander in woods and other public and private places, ambushing wayfarers whom they rob and sometimes slay.
In all these things they are aided and abetted by local people, who incite them to their evil deeds and shield them after they are done’.

-Stones, E. 1956. The Folvilles of Ashby Folville, Leicestershire, and their associates in crime, 1326-1347. Transactions of the Royal historical Society 77.

It is interesting to note that the common people of the time would shelter outlaws in safe houses. Outlaws were seen as heroes even in their own time- the Langland poem was written only a few years after the Folvilles crimes were committed.

It is easy to see how such characters became legendary.  Many of the eploits of the outlaws above have been absorbed into the myths of Robin Hood. The eariest ballads of the man in green show he was not against bouts of extreme violence himself (chopping off Guy of Gisbornes head and dancing around with it on a pole for starters).

These accounts also go someway to explaining why in the early ballads Robin had a dislike for Bishops and the clergy. There aren't many religious men mentioned above who would make good role models to their flock.

The thirst for such tales (often full of violence and trickery) was as strong in medieval times as is it to this day.