Kirkby Hardwick and the Warrior Monks

The boundaries of Medieval Sherwood Forest were disputed during the 13th century.

From that time onward they were perambulated frequently.

Some of these perambulations survive and have been preserved in a number of sources including the Sherwood Forest Books.

On the western side of the forest these perambulations all include reference to a place called Kirkby Hardwick as a boundary marker of .

This is a place that still exists to this day- although it is not known to many.


The site was until recently home to Victorian and earlier buildings forming a grand manor house. The site was set within Tudor walls of a large and high status building from the 16th century.

The site was also obviously prominent in the landscape in medieval times as...

The perambulations of Henry III and Edward I mention:

The perambulation of Charles II 1662 also mentions some of the fields and a dovecote belonging to Kirkby Hardwick including:

– all helping to give us a picture of the landscape at the time.

By the time of this later perambulation the forest boundary had moved westwards to include the parish of Sutton and the Kings Wood of Fullwood to the north of Kirkby Hardwick.

Kirkby Hardwick was left out of the forest at this time.

The only part within the forest was the area of lings (heather) heathland which occupied the eastern side of the manor. The hall and its fields were left out of the forest.

This suggests it was an important place at this time, and as stated previously the ruined walls of a substantial Tudor building still survive that co-incide with this period.

The name Hardwick means ‘Herders Wick’ or ‘Shepherds enclosure’ and it was probably an outlier of Kirkby in Ashfield in its original form.

Kirkby Hardwick seems to have sprung to greatest prominence with its ties to Bess of Hardwick in the 16th century, but it had important links before that time.

The Forest Eyre of 1334 lists possessions of the Priors of Newstead in Kirkby Hardwick that were exempt from Forest Law.

This link to a religious house is important. The religious communities of the forest, and the churches, Bishops and particularly the Arch Bishop of York were given many exemptions from the laws of the forest.

The inquisitiones post mortem for Nottinghamshire into the inheritance of a Robert Illyngworth in the early 14th century mention links to the Knights of St John of Jerusalem the Knights Hospitaller as the owners of at least part of the manor.

Also to their previous rights to Free Warren where the land was not in the forest.

Free was granted by Charter from the King and allowed exclusive rights to hunt cat, squirrel, hare rabbits and other beast of the warren.

This was a high honour.

This reference to the Knights Hospitaller is exciting as there are not many links to the military orders of the Middle Ages in the forest.

Intriguingly the post mortem also mentions a number of ‘’ properties in the same entry.

This suggests that the Knights Hospitaller gained these lands from the Knights Templar when their order was suppressed from 1312 onwards.

Could Kirkby Hardwick have links to the Knights Templar? 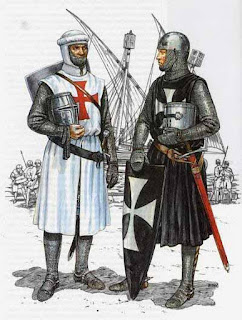 Gadding About in the Forest

Medieval Sherwood Forest was criss-crossed by a number of roads winding through the heath and woodland heading out from to the towns of the north.

The Kings Highway ran from Nottingham to York, passing the Cistercian Abbey at Rufford. It crossed the great heaths of Basford Lyngges the great common of , and then across Salterford Waste.

It then passed through the wooded area of Balkhaw, near to the mighty oaks of Hay Wode, past ye Byschope wode- belonging to the Arch-Bishop of York and the Burne Abotote Wode of the Abbot of Rufford before crossing the heathland of the lordship of Rufford Abbey.

Sanctuary and refreshment could then be sought at Rufford Abbey before journeying on to the north.

The western highway by-passed the enormous Royal Deer Park of Bestwood, following the park pale (fence) to the west. After passing Bulwel towne and crossing the heathland of Kyghill refuge could similarly be sought at the Augustinian Priory of Newstead.

Amongst the vagabonds, travellers, outlaws, malefactors, pilgrims and foresters, farmers, tradesmen and others who would have passed by on the roads… 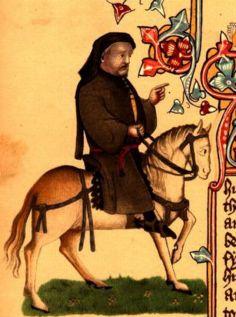 A traveller might meet a monk ‘gadding about the forest’

‘Gadding about’- is to wander aimlessly and without purpose - a phrase still used locally to this day!

Many a complaint was issued regarding the monks of Newstead ‘gadding about’ – effectively going AWOL from the priory (without permission of the prior!)

In 1304 the monks there were forbidden to keep more than 2 horses- possibly to try to reduce the number of monks on the loose in the !

(More on the priors of Newstead, the monks of Rufford and journeys through the landscape of Medieval Sherwood Forest soon)
Posted by Andy Gaunt at 19:40 No comments:

The 14th century was a dramatic time in Sherwood Forest and throughout the region around Medieval Nottinghamshire with many outlaws roaming the countryside!

It was a century of enormous social change and social strain.

Locally bands of evil doers and malefactors such as the Folville gang and the notorious Coterel gang roamed the countryside robbing and kidnapping (see outlaws page).

Edward III would storm into Nottingham Castle and regain control of his Kingdom from the usurper Roger Mortimer -who had taken the throne along with his mistress Queen Isabella from Edward II her husband.

(more of that and the red hot poker later)…

Nationally the peasants would revolt in 1381.

The Hundred years War was kicked off by Edward III in  1337.

and the Scottish raids of the Reivers wreaked havoc...

‘This social anarchy…’ saw ‘the creation of bands of vagabonds and outlaws in Sherwood Forest and other forests as the result of Scots’ raids and the famine of 1315-16’ (Cameron 1971).

Alongside The great political stories of the day and the impact this could have on the people; natural disasters also forced many into outlawry!

In 1315 great floods and famine struck the country.

The River Trent burst its banks destroying roads and bridges, and damaging crops.

The Hethbeth bridge (modern day Trent Bridge) was damaged along with the causeway linking it to Nottingham.

This would have had an impact on trade in the town.

Grain prices went through the roof as crops failed.

The following dramatic entry from the Nottingham Date Book 850-1884 demonstrates the panic of the time:

‘Nottingham, at this time, along with the rest of the kingdom was grievously affected with famine… children were stolen and converted to food, and prisoners newly brought into jails, were, in several instances, torn to pieces by previous inmates , and eaten half alive…’
(Nottingham Date Book 850-1884).

Perhaps a little dramatic- but not likely to be entirely inaccurate…

This famine was followed by a sheep moraine and panic must have engulfed the area.

Many people died, and many of those who survived seem to have been forced by circumstance to take to the forest as outlaws- perhaps because they were behind on their rents and payments...

Normality did eventaully return to Sherwood Forest and the rest of the country in the aftermath of the great famine, and life settled back into the cycle of the seasons…

…. But it would not be long before King Death was roaming again… in 1348/9 up to a quarter of the population would fall to the horror of the Black Death as it spread like wildfire around the kingdom….

But more of that later…

The Great famine of 1315 is a stark reminder of how difficult and hard life could be in Medieval Sherwood Forest.

Email ThisBlogThis!Share to TwitterShare to FacebookShare to Pinterest
Labels: outlaws of the forest, Sherwood Forest

Voices from the forest

The oldest surviving map of Sherwood Forest is known as the Belvior Map and is dated from the late 14th or early 15th centry.

It is also possible to hear the voices of the people who lived in the forest from a detailed study of its text.

The map consists of a list of places and topographic features such as hills, streams and valleys.

The names used in the map have a distinctively northern aspect revealled by the form 'forth' for ford and also the use of the word 'hoyle' for hole (Ferny Hoyle, Netilworth Hoyles, Tyb Hoyle) and 'roide' or 'royde' for road ( ye royde of Boluel, ye Rede Royde Hil, Yo Roide Imbelow) (Barley 1986).

This diphthongization had been thought characteristic of the area of South Yorkshire, but this map shows this accent and dialogue was spoken throughout Medieval Sherwood Forest as well.

It is wonderful to be able to hear the voices of the Medieval people of Sherwood Forest through this historic map.

The people can be heard if you know where to listen...
Posted by Andy Gaunt at 20:22 No comments: