The 1609 crown Survey of Sherwood Forest by Richard Bankes was a map and accompanying terrier produced on behalf of the newly crowned King James I (1603-1625), to check on land ownership and assarting (clearing of woodland against the Forest Law) within the Medieval Forest of Sherwood. This was for purposes of taxation (Mastoris and Groves 1998) (more on the 1609 map soon).


This map shows the boundary of Sherwood Forest deviating from the route of the River Trent, to follow an ‘oulde course of Trente at Shelforde'.

This former route of the river seems to have been an original course according to this map.

But was this an original single channel of the river?

These answers can be found by using landscape archaeology techniques, and through examination of the other surviving sources.


There were two branches of the trent in 1609, but what about earlier?

By the 16th centry there were two channels:

In 1592 these channels would be the cause of a dispute taken all the way to the Star Chamber of Elizabeth I. This was due to damming of the northern channel with a wier by Sir Thomas Stanhope. He even built locks to allow traffic through the more important northern course through a pound lock he constructed in 1577 between the island of Prier Houlte and Shelford. (Salisbury 1982, Revill 1971).


The southern channel at this point was used for powering mills (this dispute and locks will be discussed in a future entry- the locks are the oldest example known on the Trent).

This is backed up by evidence from the earlier Tudor period that shows the route had gone out of use for major river transport by these times:


It would appear then that there were two courses of the river by the 16th century.

The southern route of the Trent was no longer a navigable part of the river by the reign of Henry VIII, and was considered an old course at this time.


The northern channel was therefore the main navigable route by the 16th century, and would remain so from then onwards.


So did the course alter dramatically in the medieval period? Perhaps an event of flooding forced an entirely new course to the north? Or was there already a large meander to the north of the southern route?


Mapping evidence both modern and historic suggests the northern course of the river was in existence- and was perhaps the main channel through most of the Medieval period.


All the fields south of the current river channel (the northen course) were in Shelford parish, suggesting the northern river course was there when the village was formed- and was a considerably more formidable boundary than the southern course.


The exception is Burton Meadow (see map)- the shape of this field suggests it was within a previous looped Meander of the Trent heading south from the northern channel.

Burton Meadow was originally connected to the rest of Burton parish, and this meander must have been cut off at the neck - seperating Burton Meadow from the other fields of Burton at some point after the parishes of Burton and Shelford were formed.


This would also suggest that the northen course was there in the early Medieval period.


The shape of this ancient meander around Burton Meadow accounts for the sudden right angle seen in the southern course of the Trent just to the north of Shelford. It was here that it originally joined the northern channel.

Interestingly the medieval perambulations of Henry III and Edward I make no mention of two courses of the trent.


It seems that where the boundary encountered more than one river channel it followed the external channel- extending forest jurisdiction over the largest area.


A similar situation occurred on the River Leen near Nottingham, where the river also had a number of courses.


The course furthest to the West was the one used as the boundary here.


The old course of the Trent at Shelford then, was not an original,single channel, but one of two courses- and was referred to as ‘old’ in the 16th and 17th centuries as such because it had by then gone out of use. 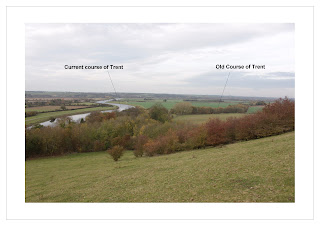 
The two courses of the River Trent can still be seen in the landscape today. The northen course was canalized by the Trent navigation works in the 18th century, but can clearly be seen on the photographs below. The old course to the south which formed the boundary of Medieval Sherwood Forest can be seen preserved by a line of trees. 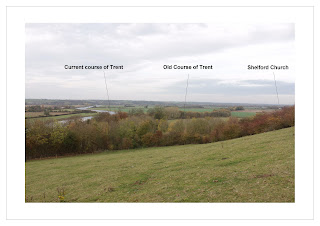