Archery in the Forest

The archery contest is a major recurring theme in the legends of Robin Hood.

In the earliest Ballads the archery contest appears twice in the Gest, and once in the The Potter. (For an introduction to the ballads and legend see the Legend of Robin Hood enrty) in all three of these instances the location of the contest is specified as Nottingham.

On the second occasion in the Gest, and again in The Potter the location given is the town Butts (Holt 1989). 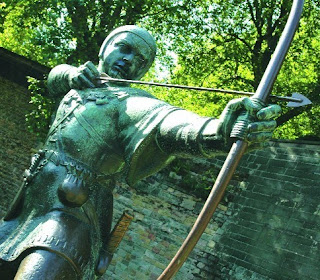 Such contests must have been common in medieval times, with people shooting at Butts, or watching others.

In the Assize of 1242 the possession of sword, bow, arrows and knife was enjoyed on all free men who held land worth £2 to £5 a year or chattels (carriable possessions) valued between £6 and £13 6s. 8d. (note this is based on a persons wealth). In 1363 Edward III instructed that archery practice was to be compulsory on feast days and Sundays, and in 1465 Edward IV required that Butts would be maintained in every township for regular practice on festivals (Holt 1989).

In a forest it was illegal to travel with a bow and arrow.

The town Butts would therefore have been one of the few places that shooting arrows was permitted.

This must have made them popular to say the least.

In Nottingham the town Butts were located beside the road to Derby outside the Chapel Bar gate to the northwest of the town walls in a triangle of land between Derby Road and the Castle Deer Park near the modern day 'rope walk' (Butler 1950).

Maybe this was where Robin Hood undertook his legendary competition?