The Butcher, the Bacon and Bestwood: Trespass in Bestwood Park in 1440

On Janurary 16th 1440, an 'action by Ralph, Lord Cromwell, for breach of Bestwood Park', was brought before the Nottingham Court... 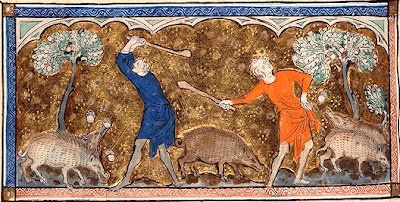 'Radulphus, Dominus de Crumwell, myles (Ralph Lord of Cromwell, knight), complains of William Fisher, of Nottingham, butcher, in a plea of trespass against the peace of our lord the present King...

...And whereupon he says, by his attornies William Alwin and John Morton, that the aforesaid William, together with others, on Tursday next after the feast of All Hallows, in the 19th year of the reign of king Henry VI, here at Nottingham, with force and arms, to wit, with a club, drove four hogs (porcos) put and arrested for pannage within the Park of Bestwood out of the park aforesaid, and broke the park aforesaid... to the cost of 20s...'
William presented himself to the court to show he was innocent...

Unfortunately there is no follow up to the case, so it is not certain of the outcome of the trial.

What is strange is that this is not poaching in the normal sense.

These are not the Kings deer, and the butcher was not hunting with a bow.

He went in to the park, broke the park pale (three metre high fence) down, and stole four pigs who were grazing within - using a club.

Clearly Bacon was not easy to come by for his butchers shop at that time...

The pigs were grazing in the park legitimately under the pannage system.

Pannage was a common right for peasants who were allowed to graze their pigs in the woods of the forest when the acorns fell and for a period of time after. This season was decided at the Verderers Court (see Forest Law page for more details) and the numbers of pigs were monitored by Agisters who acted as tax collectors.

The Keeper of the Forest here brought complaint before the Nottingham Court to gain the money back from the accused, caused by the trespass and damage to the park.