The 1287 Sherwood Forest Eyre Court took place on the morning of the feast of St Hilary (January 13th)in Nottingham. 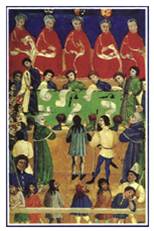 Pleas of the Forest were heard before Sirs William De Vescy, Thomas de Normanvillle, and Richard de Creeping- Justices in Eyre of the Lord King for pleas in Sherwood Forest.

They were also heard before the Verders (viridarios) (see Forest Law page) of the Forest:

Robert D’Everingham forester in fee (forestarium feodi)- Keeper of the Forest, and under him Richard of Coningeston, his attourney, Robert the Tailor, Hugh Flambard, William the fisher (Willelmum Piscarium), Willialm of Durham, Adam of York (Ebor- from Latin Eboracum – York), Robert de Strelley, William be Blakeburn, the sworn foresters of Robert D’Everingham.

Walter of Winkburn the attourney of the justice of the forest , and under him William of Hastings, William de Sheffield (Schaffeud), William the Welshman (Waleys), Robert of Linby, Bate of Linby, Hugh of Mansfield and Henry son of Richard of Clipstone.

The court opened and heard a number of cases of trespass against the venison- poaching deer:  these can be seen in Forest Law Outlaws and Poaching in Clipstone Park in 1279 entries.

The court then proceeded to set out the following points:

1.       The Verderers of Sherwood are to hold their court  every 40 days into the small infringments against the vert (cutting down trees) and small pleas – as stated int the Charter of the Forest

(the great charter of Magna Carta was first signed in 1215, it was followed by a seperate Charter of the Forest in 1217 - more soon). They were to present their findings on two court rolls to the Eyre- one for Vert and one for venison (see Forest Law page).

It seem the Justices in Eyre and the King believed that the local justices (verderers) were failing in their duties in upholding Forest Law.

2.       All the demense woods of the lord king (bosci domini regis - woods owned by the crown) and his enclosures and parks (haye et parci) were to be guarded as to the vert, that if anyone who lives in the forest is found felling a green oak he is to be forced to attend the said verderers court and there provide enough pledges till the next forest eyre (a person had to find somebody who could guarantee that they would attend by pledging money if they didn’t – that person would then force the attedance of the accused if necesssary to guarantee their presence).
His Mainour (that which he stole) is to be appraised by the foresters and verders and he is to pay the amount it was worth to the verderers.
If a person is caught a second time trespassing against the vert- the same will happen.
If a person is caught a third time they will be locked up safely in the prison of the lord King at Nottingham until they can be brought before the justices in Eyre.

Being locked up was no relaxing time- medieval prisons were harsh places with no food provided (a person relied on food brought from outside) and very poor sanitation- well often no sanitation.

The forest Eyres were not exactly regular so a wait at his majesty’s pleasure was not exactly pleasurable- and you could be in for a long wait!!

This may seem bad enough- but at least if you lived in the forest you had three strikes before you were sent to gaol.

It was different for those living outside:

3.       Anyone dwelling outside the forest caught felling trees in the demense woods of the lord King also had to pay the amount it was deemed to be worth
His body was then to be submitted to  prison (corpus suum committatur prisone) until he can be brought before the justices of the forest.
Strike one- Prison.
If he is found a second time then the same will happen.
If he is found trespassing against the vert for a third time he is to lose his horses with his cart, or his oxen with his waggon, or their price; and that price must be paid in full at the next verderers court  or to the neighbouring township for the use of the lord king , so that the verderer or his heirs or the township may answer therefore to the lord king before the justices in Eyre.

Presumbaly losing a horse and cart or an oxen and wagon was almost terminal for your average medieval peasant!

This entry lists ‘cutting saplings, branches or dry wood from oaks or hazels or thorns or a lime or an alder or a holly or such like trees...’

There are not many references to the types of trees available to peasants on the ground in the forest- different woods burn at different intensities either slow or fast and would be needed for different kinds of cooking and heating, they also had different properties for building houses and hedges- this gives us a glimpse of some of the trees and sapplings being used, and we can begin to think about their uses for the medieval peasant.

Entries 5 and 7 discuss the fines for escaping beasts of the plough (escapia aueriorium) which ended up in the woods of the king causing damage there.

Entry 6 states that ‘it is provided that no man in the future carry bows and arrows (arcus vel sagittas) in the forest outside the king’s highway, unless he is a sworn forester (forestarius iuratus).

The remaining entries list responsibilities of the regarders (those who check the boundaries) and foresters with regard to trespass in wood not belonging to the crown.

The forest Eyre of 1287 then, gives us a great insight into the adminsitration of Sherwood Forest and the application of Forest Law and its impact on the lives of the people in and around Medieval Sherwood Forest.