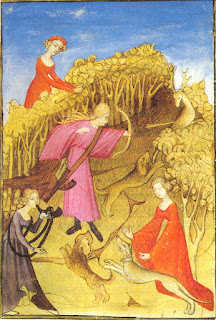 Every Medieval forest in England had a keeper.

These Keepers of the Royal Forests could be responsible for more than one forest (see forest law page for more details). 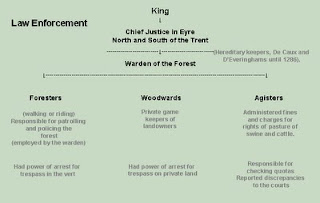 In Nottinghamshire the Keepers of Sherwood Forest were for many generations hereditary.

These hereditary keepers of Sherwood Forest (or the Forests of Nottinghamshire), were the De Caux family, and later through marriage the Birkin and then the D'Everingham families.

They were based at Laxton Castle, Nottinghamshire.

Gerard De Normanville (in the time of William I)


After: Crook, D. 1980. The early keepers of Sherwood Forest. Transactions of the Thoroton Society LXXXIV, 14-20.
Robert D'Everingham lost the keepership in 1287 through poaching- (more soon)

Of the 11 hereditary keepers of the Forest up to 4 were women!

Of the first- a Basilia De Normanville little is known- she was perhaps married  to Robert De Caux under the command of Henry I (Crook 1980).

There were 2 Maud De Caux's in the late 12th and early 13th century. One was the others aunt.

The first Maud De Caux had her position and that of her heirs confirmed in a charter by King John between 1189-94 at Derby.

She was succeeded by her aunt after dying without heir - the keepership did not trasnfer to an arm of the Fitz Stephen family, but stayed with the second Maud De Caux.

In 1204 King John took over Laxton Manor for himself- but the keepership remained in the hands of Maud De Caux.

In 1217 one of the Maud De Caux -had a run in with the Sheriff of Nottingham Philip Mark who was trying to take over the keepership for himself! (see A Bad Sheriff entry for more details)

- suggesting the office was hers not her husbands!

So it seems that up it was possible for women to hold positions of power in Medieval Sherwood Forest, even that of the keepership.

This did change once the king granted the keepership to favoured individuals following the stripping of the keepership from Robert D'Everingham in 1287, but it shows that the role of women in Sherwood Forest in the Medieval period should not be underestimated.

(More on the Keepers of Sherwood Forest, women in the forest coming soon)