The main court of the Forest Law in the medieval period was the Forest Eyre.

This was held at irregular intervals by itinerant justices appointed by the King to administer the laws of the Forest.

The records for two of Sherwood Forests Eyre Courts survive in full. These are for 1287 and 1334.

There were two jurisdictions for the justices in Eyre for the country- one for south of the River Trent known as 'this side Trent' and one for the north known as 'Yon side Trent'.

The Forest Eyre for Sherwood Forest was therefore administered by 'the Kings Justices in Eyre Yon side Trent'.

In 1334 The Pleas of the Forest of Sherwood were heard by Ralph De Neville, Richard of Aldborough, and Peter of Middleton, at Nottingham on 'the Monday next after the Feast of St George in the Eighth Year of the reign of King Edward, the Third after the Conquest'. 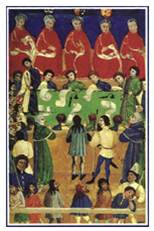 The court opened with the usual ceremony:

Following this royal and court protocol the Justices of Eyre are presented, and confirmation is made that the following is an exact record of the occurrences of the court.


The first trial before the court is of Hugh of Wotehale, William Hyend , Wilcock and Stephen Fleming of Nottingham who took a Hart in the Forest.

This is recorded in the Forest Law Outlaws entry on this blog.

The next entry recalls an inquiry made in 1288 by Edward I under his then Chief Forester William de Vescy.

This inquiry was into the previous rights of the then deceased Robert D'Everingham when he was formerly Keeper of Sherwood Forest.

Robert D'Everingham was stripped of his rights and position of keeper of the forest and imprisoned in Nottingham Castle at the 1287 Forest Eyre following indiscretions in the Forest.

He was dead within a year - so probably died in custody.

His family had been keepers of the forest back through marriage for hundreds of years.

This inquiry was to see what rights he had had that could now be bestowed by the king on the next keeper of the Forest- no long a hereditary right.

Besides these two entries regarding outlaws and crimes of hunting, the Forest Eyre is from then on a list of all the misdemeanours in Sherwood Forest since the last Eyre. The people listed below had all committed 'trespass against the vert' at a value greater than 6d.

The following pleas were heard before the court:

Ralph son of Reynold of Edwinstowe for 1 oak 10d. His ‘plegii’ (pledges) were Richard of Normanton and Richard Godard of Thoresby. ‘Pro transgressione in misericordia nunc in itinere’ (for the trespass, he is now at the mercy of the Eyre).

Reynold the son of Geoffrey of Thoresby ‘una stobe’ (1 stub) at 8d.

Hugone ad Pontem (Hugh of the Bridge) of the same town ‘pro stoches’ (for stocks) of the price of 8d.

Ricardo filio Galfridi filii Iuonis (Richard son of Geoffrey the son of Ives) of the same town ‘pro cheueronibus’ for chevrons of the price of 10d.

Nicholas Payne of Warsop for ‘uno ramo’(one branch) at the price of 6d.

Iohanne filio Willelmi de Thoure (John the son of William of Thoure) for a ‘quercu viride’ ( green oak) of the price of 18d.

Gilbert Fadir and Gilbert Gilling ‘pro melle asportato de bosco’ for honey carried away from the wood, of the price of sixpence

Thomas Sheth of Mansfield for a ‘domo vendita’ (house sold).

After listing these men and their crimes ( some of them fairly petty eg. Nicholas Payne; one branch) the Erye Court then goes on to extract fines from the Verderers of the Attachment Court (see Forest Law Page) for failing to produce the rolls for their courts at Lindby, Bulwell, Calverton, Mansfield and Edwinstowe, for the years 1287 to 1289.

Does this suggest a level of corruption amongst these court officials- taking the money and evidence from the smaller courts of the forest and failing to declare them?

The Forest Eyre then, dealt with the crimes against the Venison, and by important men of the region such as Robert D’Everingham former Keeper of Sherwood Forest. It also kept the smaller courts and their officials in check.

It also seems to have dealt with the larger transgressions (more than 6d) against the Vert.

The court rolls show us the names of those involved and the places they have come from, and it certainly seems that many of the crimes described are committed by people trying to make a living in the forest- not by hardened criminals as might be expected.

These people are ordinary folk taking small amounts of timber, branches and sometimes even honey from the woods of Sherwood.