Fire in the Forest

The proceedings of the Forest Eyres and Attachment courts are full of the records of encroachment on the woods of the forest.

People were constantly being fined for chopping down trees.

Alongside this attack on the 'Green' or 'Vert' of Medieval Sherwood Forest by the people who lived there, there were also natural disasters that chopped away at the trees and woods of the forest overtime.

One obvious problem of living in an area dominated by vast areas of open heathland and large tracts of woodland was of course fire. 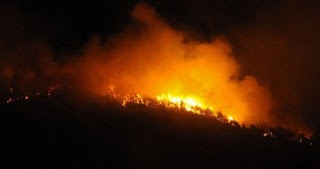 The Middleton Forest Book opens with a reference to the village of Mansfield  Woodhouse burning to the ground in 1304! (Boulton 1964)

Timber was requested of the King from Sherwood Forest to allow the rebuilding of the town including the Kirk (church) which had been ‘brenned’ or burned in the disaster.

A recent Archaeological project undertaken by Nottinghamshire Community Archaeology ‘the Mansfield Woodhouse Little Big Dig’ – digging test pits in the gardens in the historic core of the town with volunteers as a community project- produced excellent results.

Radio-carbon dating of charcoal fragments found in test-pits has produced dates from within 10 years of the 1304 date.

This information has helped discover the original layout of the village- which was altered in the rebuilding.

This disaster at the end of the reign of Edward I is documented because Mansfield Woodhouse was a royal manor born out of the manor of Mansfield.

Another disaster from the end of our period shows well the panic and mass response to the terror of a forest fire, and shows how dangersous a long hot summer in Sherwood could be:

‘In 1624 during the great drought of that year Sherwood Forest suffered a great fire, and White (Worksop, the Dukery, and Sherwood forest) quotes from a manuscript preserved in the British museum in which it says that there was such a mist of smoke and particles that people thought it was an eclipse of the sun, but when the true cause was discovered ‘there came command from the justices to raise the country there about and bring pickaxes, spades and shovels to make dikes and trenches to break the fire in the forest’. This fire, four miles long and half a mile wide, was stopped at the wood between Mansfield and Nottingham’.
(Illingworth Butler 1946)

Fires are still common in the summer in the large plantations of Clipstone, Blidworth and the other woods of the high forest- where laws to prevent camp fires etc. reduce the number of fires being casually and deliberately lit by most people.

If you imagine a world where shepherds would sit with flocks on the open heath, charcoal burners plied their trade in the myriad of woods, travellers camped by the roadside, foresters, woodcutters, woodwards, sawyers and many others had fires as they worked…and where outlaws lit fires in the depths of the woods…

...also a world where timber-framed buildings and thatched roofs were the norm…

…it is undoubted that the threat of fire was a very real and very common occurrence in Medieval Sherwood Forest.
Posted by Andy Gaunt at 19:23