Taken from Nottingham Post Friday 20th July 2012: 'ARCHAEOLOGISTS now believe they have found the "medieval centre" of Sherwood Forest in a dig at a 12th-century site.

The dig over the weekend was the latest in a series which have aimed to uncover the historical secrets of the ruin.

Excavations proved that the exterior defences encircled a much bigger area than first thought and seem to finally prove that it was once a huge royal residence.

Notts archaeologist Andy Gaunt, who worked on the dig, said: "I think the site is the medieval centre of Sherwood Forest. For a couple of hundred years this is where all of England's kings were going.

"We've proved what the medieval boundary of the site was."

The series of trenches uncovered a 180m long defensive ditch – proving for certain the site stretched far beyond the three remaining walls of the small ruin and was once a vast complex...'

See the full article at: http://www.thisisnottingham.co.uk/Experts-heart-historic-forest/story-16567795-detail/story.html

Posted by Andy Gaunt at 21:53 No comments: Links to this post

St. Mary's Church, Nottingham- and Robin Hood and the Monk 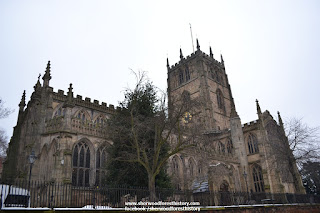 St Mary's Church in Nottingham is the earliest church in the town and is mentioned in Domesday Book. It was at the heart of the original Saxon town.


The earliest of the surviving ballads of Robin Hood- Robin and the Monk (talkyng of the Munke and Robyne Hode)- written down around 1450- mentions St. Mary's Church in Nottingham. Robin is said to have visited the church (he was devoted to the Virgin Mary) when he was spotted by a Grey Monk whose alarm forced him to be captured. The tale tells of his subsequent rescue from the Sheriff by Little John and Much the Miller's Son.


The church was almost entirely rebuilt in the Perpendicular Gothic style in the 15th century, and is a fantastic example of this style of architecture- with its south and north transept windows utilising the innovations in architecture to create almost entire walls of glass.


The church was under the control of the nearby Lenton Abbey in the medieval period, and was a the heart of religious life in the town.

In the heart of medieval Sherwood Forest on the edge of the ancient crown woodland of Birklands is a hill and mound marking the boundary of 3 parishes.

This hill is now called Hanger Hill, but its ancient name was Thynghowe.

The name of the site indicates its former use as a meeting site either for the parishes upon which it bounds, or for a wider regional scale.

The derivation of Thynghowe is þing haugr, meaning ‘hill of assembly or meeting place’. (EPNS 1940). “þ” is the Saxon letter thorn pronounced “th”.

The site could have very ancient origins indeed. The name is of Viking origin, and the site may have occupied an older mound still.

Thynghowe sits in a remote location that could have been an important meeting point way back into pre-history.

The site was rediscovered by Lynda Mallett, Stuart Reddish and John Wood using a perambulation document from 1816.

Work by the Friends of Thynghowe Group in Sherwood Forest is currently being undertaken. Please check out their work and follow their work on http://www.facebook.com/Thynghowe

They arealways looking for interested people and volunteers to join in with their archaeoloigcal fieldwork and historical research.

Posted by Andy Gaunt at 22:16 No comments: Links to this post